Appreciation in an International Multi-Cultural Organization

Recently, I had the privilege to provide training in communicating authentic appreciation to the management and supervisors of an elite international organization.  Functioning within the tourism and hospitality industries, the staff (in one location) come from over 40 countries and six continents. 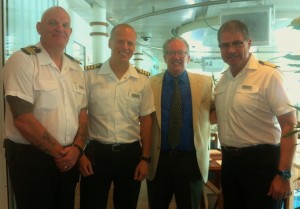 As I approached the training, I was interested to see and hear if the staff desired to be appreciated for their work.  Additionally, I wanted to find out whether communicating appreciation in the workplace was relevant across many cultures.  Finally, I was curious to learn various ways employees felt comfortable receiving appreciation and what the challenges might be due to differences in the variety of cultures (for example, British, Norwegian, Filipino, Colombian, South African, Indian, Irish, Egyptian and American).

•    No Surprise – All cultures affirmed that, yes, they would like to be valued for the work they do (and have the appreciation communicated to them by their supervisors and colleagues).
•    Suspicion Confirmed – A few individuals reported that appreciation in the workplace was not part of their home culture (mainly northern European cultures—Finnish, German, etc.).  Appreciation from one’s supervisor was not expected by the employee nor did managers believe they should have to communicate appreciation.
•    An Affirmation – Having translated (both linguistically and culturally) our materials into different languages I was fairly sure that there would differences in the type of appreciation desired by individuals from different cultural backgrounds.  Most were familiar the concept of saying, “Thank you” or “Good job.”  But the idea that there were others way of expressing appreciation (spending quality time, doing an act of service) was new to a number of them.
•    New Perspective – One interesting observation was that people have fairly strong opinions about what they did not like in how appreciation might be communicated by others.  The Brits were repulsed by the repetitive kissing on the cheeks by the Southern Europeans (Portuguese, Italians).  Many European women did not understand the purpose or meaning of “high 5’s” and “fist bumps” and the Filipinos did not understand (and sometimes were offended by) the humor used by the British, Irish, and Americans—which was often seen as a way of communicating warmth and friendship by the senders.

One of the encouraging aspects of the training was the feedback I received from the top executives down to the front-line supervisors.  Many indicated that the core concepts of communicating authentic appreciation were:  (a) enlightening to them; there were new perspectives that they hadn’t been exposed to before; and (b) thought provoking—we offered a new way of thinking about work relationships that challenged some of their previously held beliefs.

The most important concepts they value included:
•    Not everyone feels appreciated in the same ways;
•    There are alternative ways to communicate appreciation besides words (and that words are not valued by everyone);
•    Communicating appreciation in the way that is valued by the recipient is critical, as opposed to what the sender prefers;
•    Perceived authenticity is key and can be a challenge in cross-cultural work relationships.

I’ll report back with more observations and lessons learned, as I continue to work with this world-class company in teaching the staff how to communicate authentic appreciation throughout the whole organization.  Until then, you can’t miss the mark by saying “thanks” for a job well done, regardless of the cultural background of your colleagues!