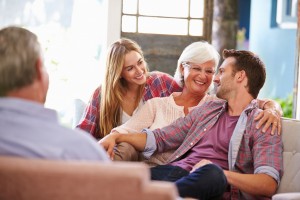 Typically, I address work relationship issues in my posts.  Today, however, I want to cross over into the personal realm a bit because the 5 languages of appreciation do have a direct connection to Father’s Day.  While the 5 Love Languages clearly and effectively address how to communicate love to the fathers in your life (your dad or stepdad, your husband, brothers), many may find communicating appreciation to these dads easier than conveying “love”.  So let me give some suggestions on different ways to show appreciation for the dads in your life, based on what we know about the 5 languages.

First, it is important to note that there are both general cultural norms and specific family expectations (learned over time) about what you should do for “dad”.  Getting him a gift, making him a card, calling on the phone (even for 5 minutes) — all can be expected.  The problem with this is: not every dad feels appreciated in the same ways.  (I’m pretty sure my dad got tired of receiving neckties – some nice, some stupid — over the years.)   Let’s look at some different options you maybe haven’t thought of:

All dads have faults and make mistakes.  Some dads have acted in ways that make it tough to love and appreciate them. But, when possible, do something this Father’s Day that is meaningful to them to communicate your appreciation for how they’ve impacted your life positively.   Your words and actions won’t be a waste of time and effort.