Working From Home: How the Concerns of Employees and Managers Differ 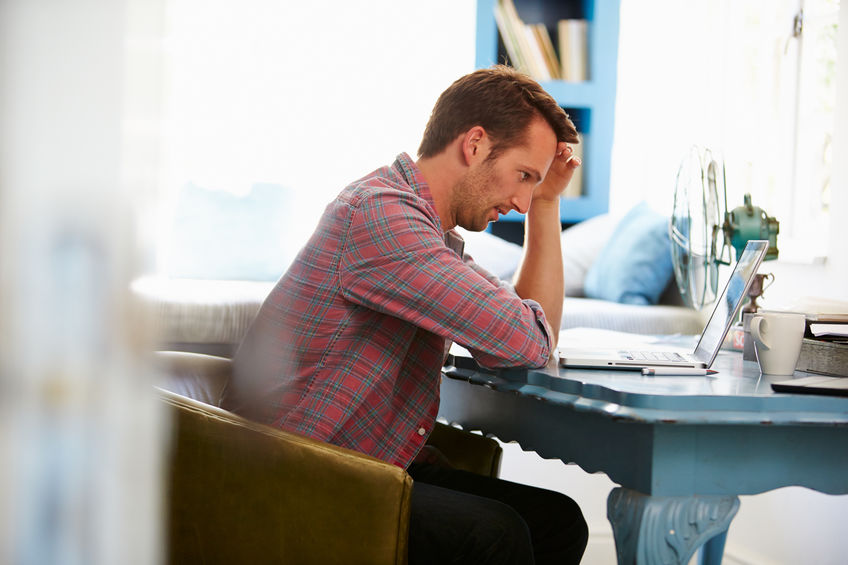 Recently, we conducted a national survey with over 500 employees and organizational leaders. We wanted to find out the issues that remote and working from home (WFH) employees were currently most concerned about.

Last week, we reported the results for the group as a whole (all of the respondents together). Two concerns were rated more highly than the rest (a total of 22 issues were offered):

Additionally, a total of 13 issues rated (out of the 22) had at least 50% of the individuals rate the issues at a moderate or extreme level of concern. You can read the summary report of the initial results here.

Exploring the Differences Between Groups

As part of the initial survey, we asked the participants to identify themselves as a member of one of the following groups:

After reviewing the initial response results, there were some patterns that seemed to warrant further exploration; specifically, whether the various work groups had differing levels of concerns to unique items or themes. (Note: the percentages reported below are the combined ratings of ‘extreme’ concern and ‘moderate’ concern. The other two options were ‘none’ and ‘mild.’)

The top issues were rated differently across groups, with those in leadership roles rating the challenges more highly than front-line employees did. Interestingly, 84% of managers indicated the most concern about work / life boundaries, which may indicate that they are finding themselves in a “pressure point” within the organization – with increasing demands on their time and energy while employees across the organization are working from home.

While these issues are a significant concern for all respondents, those in leadership roles reported feeling a deeper level of concern about them than front-line employees did.

There were a significant number of issues where responses differed by type of group member. These were largely related to issues that supervisors, managers and executives would typically be more focused on and concerned about than front-line employees would. These include: 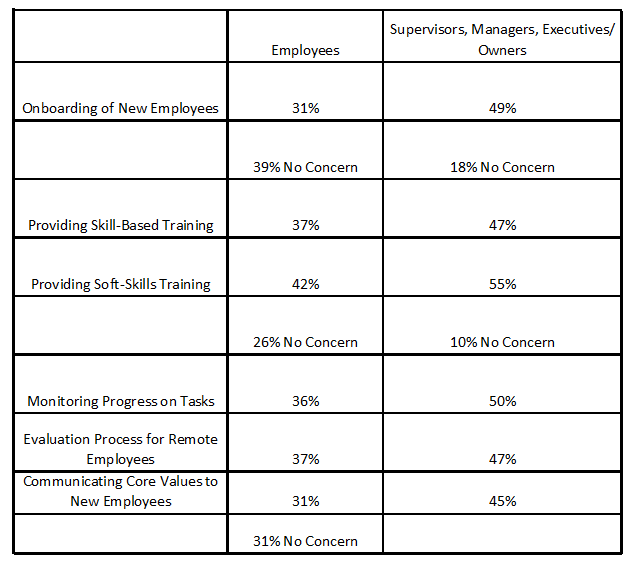 As would generally be expected, individuals in leadership roles did report higher levels of concerns on these issues than front-line employees did.

An area of frequent discussion in our culture recently has been the challenge of finding child-care solutions while working from home and the additional responsibility of overseeing the education of children doing remote learning.

We observed some interesting patterns related to these issues. For both items, 31% of employees rated them as not being concerned at all (as opposed to 12% of leaders on concerns of childcare and 17% on the schooling at home challenges). Additionally, employees were less concerned about these challenges than those in leadership were.

We can only hypothesize about the specific reasons for these differences. One possibility is that employees have actually found solutions for the challenges, while their leaders have not. Another explanation could be that those in leadership roles may be older, and more likely to have school-aged children. A third possibility is that the leaders continue to have higher levels of concerns for the employees’ situation, while the employees feel like they are “working it out.”

Two items had response patterns that were unique from the rest of the issues. Executives and Owners had far greater concerns (57%) about reaching new potential customers than the other three groups (31% average). This makes sense as they are ultimately responsible for the financial well-being of the organization and are most likely to be concerned about generating revenue.

And interestingly, when it comes to the issue of being worried about losing organizational traditions and group activities, the level of concern increased commensurately as the group members were higher in the organizational structure:

Ultimately, we must answer the (sometimes cynical) question: “So what? What do the results of this survey imply on a practical level?”

First, we’ve found that there are important issues which are of significant concern to all the respondents, no matter their position in the company. The two highest rated concerns, the mental and emotional health of team members and the challenge of work / life boundaries, if left unaddressed, will create serious problems in the workplace and our society.

Secondly, it is helpful to remember that there are issues that are highly stressful to others with whom you work even though they are not as great a concern to you. This will be important to understand when others are sharing their worries, and discussing where they would like to focus resources to address problems.

Finally, these results provide an excellent opportunity for you to open a discussion with your team members about what is most concerning to them. The most helpful information is about your team members personally (not about national groups on average). Print out this (and last week’s) blog, have them read them, and then ask them what they thought about the results and what issues are most concerning to them. [NOTE: This may be a good discussion to have as a group for some teams, while, for others, having individual dialogues may be better.]

The goal is to hear what their concerns are, to affirm and acknowledge their concerns, and to discuss potential actions that could be taken to reduce their fears. By doing so, you will take significant strides toward showing support for them and building a more cohesive team.