Almost 200,000 individuals across the world have taken the Motivating By Appreciation Inventory. This inspired us to look for ways to improve the results the inventory provides. Over the past two years we have deliberated, explored, and analyzed in order to create a new, expanded version which provides a fuller picture of how each person prefers to be shown appreciation and how they don’t want others to express appreciation to them.

The Expanded MBA Inventory builds off of the foundation laid by the Basic MBA Inventory report (which is still available) by identifying each individual’s Primary, Secondary and Least Valued Languages of Appreciation, along with the specific actions they value most within their Primary Language of Appreciation and from whom they desire those actions. 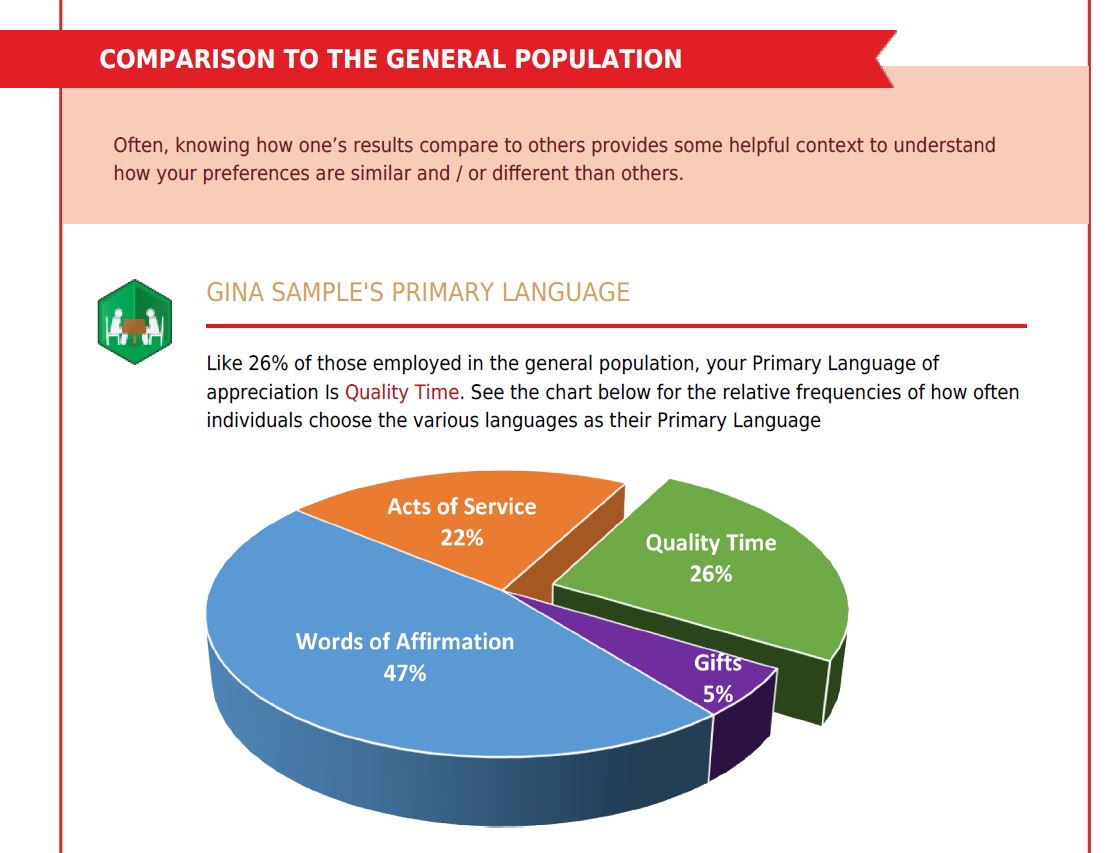 A deeper analysis provides the Expanded MBAI with valuable addition information. First, the respondent’s results are compared with over 175,000 others who have taken the inventory. Each person’s results are shown in comparison to how frequently their specific results are obtained by others in the general workplace. And to communicate these clearly, the results are not only reported in numerical form but also illustrated through pie charts.

Secondly, to help colleagues and supervisors “get to the heart of the matter” quickly, we ask each employee to identify the one most important act of appreciation to them. So that, if someone only communicated appreciation to them in one way, they would be sure to “hit the mark.”

A question we hear frequently is “What about Physical Touch – why isn’t it included in the report?” Although we address this issue in The 5 Languages of Appreciation in the Workplace and also in our Appreciation at Work training, those who have not had access to those resources, are left wondering. So, in the Expanded version, we provide the context and reason for not assessing appropriate Physical Touch in the inventory.

In our work with hundreds of thousands of employees, we’ve heard many people make informal comments about how they don’t want to be shown appreciation. While the primary focus of the MBA Inventory is to identify the ways colleagues prefer to be shown appreciation, we felt identifying the actions to avoid would be valuable information to include – so that well-meaning colleagues do not inadvertently make a mistake by using an undesired action and unintentionally create offense.

We are excited about the new, Expanded version and have already received “rave reviews” about it from those who have taken it. The code for taking the Basic version of the MBAI that comes with a 5 Languages of Appreciation book, can be upgraded to take the Expanded version. Codes for the Expanded version can also be purchased separately for both individuals and groups.

We strongly encourage you to take the new, Expanded MBA Inventory and experience a broader perspective of appreciation for you and your team!